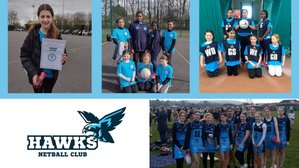 Tournament season is well under way and our Juniors have been out and about participating in some fantastic netball events.

Two Counties Monthly Tournaments
Our U11 and U12s have been taking part in the monthly Two Counties morning tournaments in Nottingham, giving some of our 9, 10 and 11 year olds their first ever match play experience! Given this is every month, the Two Counties Organisers give so many juniors the chance to play and even win a mini trophy or medal for Fair Player! Well done Eva for picking up an award!

Stamford & Rutland Junior Netball
All of our older juniors had the chance to take part in their first all-day tournament in Stamford on 20th March, courtesy of Stamford & Rutland Junior Netball Club who hosted a fundraising event for Ketton CoE Primary School. Hawks had a U12 and U16 team out, with 4 brand new players experiencing their first match play on the day. A full day left the girls tired and although there were no wins, the juniors gained great experience and had loads of fun with new friends.

Market Harborough Youth Netball
On 3rd April our U11s joined a bunch of clubs from across the region and even as far as Milton Keynes to attend the tournament hosted by Market Harborough Youth club. More of our newbies gained experience by playing, with some as young as 9 taking part, and although significantly outplayed by some very experienced girls, there were big smiles and lots learnt by the whole squad!

Thanks to all of the organisers, the girls are ready for the next set of regional tournaments to build on what they’ve learnt and to keep having some great opportunities to bond with their teammates!