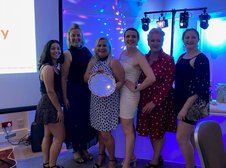 On 17th June Leicester Netball League held their Annual Gala Dinner, to celebrate the teams picking up silverware as well as the players most voted for in the 2021/22 season.

We were super proud to see quite a few Hawks ladies celebrated on the night:

Player of the Season: Runners up
Julia Roope – Hawks Navy

We have to say a massive well done to one of our Hawks teams, who won both the Division 1 trophy (and will be promoted) as well as the Plate competition - well done Hawks Navy!